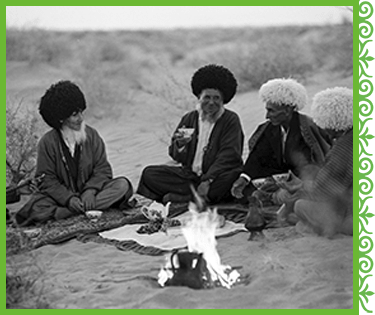 Day 1: Ashgabat
We are happy to see you in Turkmenistan. On arrival, travelers will be met by the local guide at the Ashgabat International Airport. Today is the city tour. See stunning places as parks and monuments, mosque and other places of wonder. In the afternoon we will drive to "Old Nisa" which is defined to be the Sanctuary of Parhian Kings and under protection of UNESCO as World Heritage Site in 2007. The tour will be continued to "Gypjak" Mosque and Mausoleum of the late President of Turkmenistan. Transfer to a hotel for rest.

Day 2: Ashgabat - Mary/Merv
In the morning we will drive to Mary city. At Annau there will be a break visiting traces Seyit Jamal ad Din Mosque of the 15th century. An olden Sassanian city in modern Turkmenistan is Abiward or Abi ward. Archaeological diggings in the ancient city were carried out in the last century. It was 8 km west of Kakhka station on an area of 12,000 m2. The central tell is 60 feet high and 700 feet round. We will continue our tour to Mary city. Ancient Merv is UNESCO World Heritage Site. It is one of the most significant sites of Central Asia. Merv played an important role in developing Great Silk Road for 2 000 years. The superb XII century Mausoleums of the Sultan Sanjar and Muhammad Ibn Zayd, display attractive Seljuk brickwork and architectural design. Night is in a hotel.

Day 3: Mary - Ashgabat
The tour will start by travelling to museum. You will learn more about widespread ethnography fragment, counting large collection of Turkmen jewelry, carpets, and satiated animals, fully ornamented yurt and pottery from the time of the Mongol livelihood. The archaeological division of this museum is the most imperative and exciting. This division has exhibitions such as pottery, weapons, household implements and jewelry were exhumed at Merv and Margush. In the end of day, we will return to Ashgabat city and visit Russian Bazaar and Ertogrul mosque. Overnight is in a hotel.

Day 4: Flight
In the morning is transfer to airport.