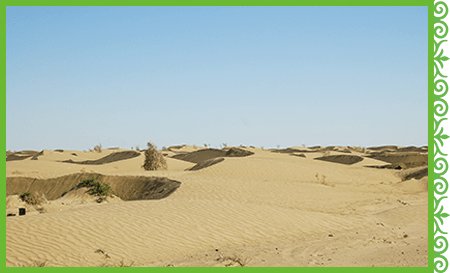 Day 1: Ashgabat
We are happy to see you in Turkmenistan. On arrival, you will be transferred to Ashgabat city. Today we will visit Nisa fortress which is the Sanctuary of Parthian Kings. This fortress was avowed as UNESCO World Heritage Site in 2007. The tour will be contined visiting the biggest Mosque in Central Asia Ruhy Mosque or Gypjak, Mausoleum of the first President of Turkmenistan. In addition, we will see the pride of Turkmen people as Akhal Teke horses. Horse farm is located in Gokdepe region. You can have a horse riding tour. Night is in a hotel.

Day 2: Ashgabat - Kow Ata - Nokhur - Balkanabat
We will travel to Kow Ata underground lake. It is situated 107 km from Ashgabat and means father of caves. This is underground zone looks like a big hall. The total length of the cave is 230 m, its height reaches 20 m, and its width at some a point is 57 m. The bottom of the cave is covered with blocks of dissolved limestone and its warm and lush water see-through and emerald color. Water has a temperature of 33-37 ° C, you can swim in the lake. We will continue our way to Nokhur. It is a small village located on depression valley with lined houses made of local boulders paved with mud. Exclusive of the main streets running via the middle of the city, the rest of the streets are so slight that they only fit the car between the high stone retentive walls on each side. The people who settled this village are quite different from other Turkmen tribes. They live in some villages in the mountainous boundary spanning Turkmenistan and Iran. Nokhur is the largest village, population only a thousand or two thousand people. We will continue to drive to Balkanabat. Night is in a hotel.

Day 3: Balkanabat - Yangykala - Gozli Ata - Turkmenbashi - Avaza
We will drive to Yangikala canyons. This attractive natural object of Turkmenistan is located at 165 km to the north from Balkanabat and 160 km to the east from Turkmenbashi. From Turkmen yangi kala means "fire fortresses". See sheer cliffs of white, yellow, ocher, violet and red colors, fancifully carved by winds and rains, are look like stone castles from fantasy. Ata is one of the most distant journey sites in Turkmenistan. Its setting is also one of the most attractive. It lies in the center of a natural bowl, enclosed by lumps of strips of pink and white stone. Gozli Ata is supposed to have been an appreciated Sufi who lived in the early 14th century. His mausoleum is a brick building with two white domes, upright in an old cemetery with many stunningly carved stone tombs. The two-headed construction of the mausoleum is essential to accommodate the length of the tomb: a triangular prism, perhaps three ordinary graves long. We will drive to Awaza. Overnight is in a hotel.

Day 4: Avaza - Ashgabat - Mary/Merv
Youbwill be transferred to airport for your flight to Ashgabat. We will visit Abiverd. It is ancient and flourished city of Turkmenistan. We will continue our tour to ancient Merv. The Great Silk Road crisscrossed there the city quickly became one of the biggest of the ancient world. It was one of the most significant capitals of Islam along with Baghdad, Cairo and Damascus. You will also visit such sights as Gyz Gala, Erk Gala, Soltan Gala, Soltan Sanjar Mausoleum, Ibn Zeid Mausoleum. We will drive to Mary. Rest is in a hotel.

Day 5: Mary - Margush - Ashgabat
The tour will start by visiting the Oasis of Merv. It is the 5th center of civilization. It was a significant center for the relocation of people long before the Achaemen times. In past times there was a wonderful Bronze Age civilization, known as Margush, which means "lowland" or in Greek Margiana. Due to Professor Victor Sarianidi, he was slowly discovered in the early 1970s. The professor led the Margiana Archaeological Expedition. Places of the Bronze are located at the northern edge of the modern oasis or beyond, on land of a desert. The reason for leaving this region was climate alteration and broadminded desertification, due to which the remains of the Bronze Age settlements were well preserved under desert soils. Wonders in Margiana seem to be closely related to wonders in Bactria, in modern northern Afghanistan. Sarianidi entitlements that the Bactria Margiana complex was a main center of ancient civilization, and recommended that Margiana may even have been the birthplace of Zoroastrianism. We will drive to Ashgabat city. Night is in a hotel.

Day 6: Ashgabat
In the morning is a city tour in Ashgabat. We will visit Revival Park, Russian Market, Lenin's square, Ertogrulgazy mosque, Park of Independence, Arch of Neutrality as well as Museum of Ethnography and Museum of Fine Arts. Overnight is in a hotel.

Day 7: Ashgabat - Damla
Today we will travel to Damla village. It is located in the middle of the dry copses of the vast Karakum desert in Turkmenistan. The village is quite small in size and defined to be heaven where you can relish traditional Turkmen life. Amongst only 60 dwellings in whirling sands, local people serenely and simply involve in their daily lives. Travelers will enjoy the real life of wonderful Turkmenistan right here in Damla. Night is in a tent.

Day 8: Damla - Darwaza
We will travel to Darwaza to see famous "door to hell". On the way we will see another 2 craters located in the village of Darwaza, in the west of the major road. The first crater is a bottomless round hole; a metal barrier environs this small crater. Travelers will feel strong smell of gas. The second is located about 18 km south of Darwaza, on the western side of the main road and is almost unseen from it. This crater does not have fire, nor does it have a strong smell. In its place, it is partly occupied with water over which the airs mildly rise. The village was once a sulfur making site, which was closed in the 1960s. The exploration for gas during the Soviet period led to a stimulating series of magnetisms around: several large round craters, one of which is on fire. To get to the blazing crater, you need an off road car, as well as a good driver who knows the route. The gas crater in terms of about is round, with a diameter of about 60 meters. Its floor cracks from hundreds of small lights; the flame is sturdiest around the boundaries. Night is in a camp.

Day 9: Darwaza - Ashgabat
In the morning is transfer to Ashgabat. We will visit Annau "Seit Jamaleddin Mosque", the main attraction of which remnants for travelers today, is the remains of the 15th century Seyit Jamal ad Din mosque. We will drive back to Ashgabat. Transfer to a hotel.

Day 10: Flight
Transfer to airport. Have a safe flight!