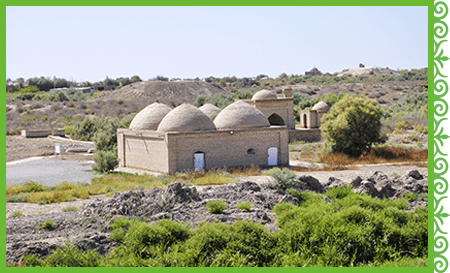 Day 1: Ashgabat
We are glad to see you in Turkmenistan. The guide will meet you at the airport and transfer to Ashagbat city. We will visit the Nisa fortress built during Parthian Empire. Old Nisa was called as Mitridatkert after the name of king Mitridate I (171-138 BC) who well-ordered to build this city. Later on, the capital was transferred to Asia Minor, but a singular attitude to Old Nisa was engaged. There located tombs of the presiding Arsacids dynasty members. Afterwards we will drive to Turkmenbashy Ruhy Mosque which can lodge more than 10,000 people. The next destination is Gokdepe horse farm where you can see the stunning Ahal Teke Horses. We will drive to the Independence Park and the Palace of Happiness where you can see the panoramic view of the Ashgabat city. Night is in a hotel.

Day 2: Ashgabat - Darwaza - Dashoguz
Today we will drive to Darwaza gas crater, "Door to hell" where you can admire fire exploding in the middle of the desert. The sight of the flame burning in the desert is outstanding and fascinating. It is located in 266 km to the north of Ashgabat city. Then we will drive to Dashoguz town. Rest is in a hotel.

Day 3: Dashoguz - Kune Urgench - Khojeili border
In the morning we will travel to the historical place Kone Urgench. It is an architectural reserve, located 480 km to the north from Ashgabat. It was capital of Northern Khorezm in the first century A.D. In the middle of the eighth century it was occupied by Arabs and in the year of 995 it was retitled Gurgandzh and became the residence of Khorezm Shah and the second-largest city after Bukhara, the capital of Samanid Empire. Transfer to the Khojeili border the end of the tour. Thank you!