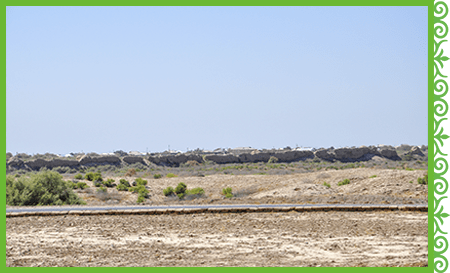 Day 1: Ashgabat
In Turkmenistan, the guide will meet you at the airport and transfer you to Ashgabat city. You will have a sightseeing tour we will to Gokdepe village to visit one of the chief mosques of the Central Asia, Turkmenbashy Ruhy Mosque which can inhabit more than 10,000 people. After the Mosque the next destination is Gokdepe horse farm where you can see the good-looking Ahal Teke horses. Afterwsrds we will visit Independence Park and the Palace of Happiness where you can see the panoramic view of the Ashgabat city. Night is in a hotel.

Day 2: Ashgabat - Kow Ata - Nokhur
In the morning you will travel to the Kow Ata underground lake and the Bakharden cave. The lake name is translated as "father of the caves". Its popularity is related rather with the curative properties of water. Then we will drive to Kopet Dag range, where there is a region settled by mountain tribes of Nokhur that have for centuries preserved their unique culture, traditional crafts and architecture. Overnight is in a homestay.

Day 3: Nokhur - Ashgabat - Kerki
In the morning we will return to Ashgabat and visit the honoring complex consisting of three memorials erected to those who died in the 1948 earthquake, soldiers who lost lives in WWII and those killed in other Turkmen battles. The Earthquake Memorial structures a bronze rendering of a bull and child. Then we will drive to the Russian Market. It was constructed in the period of 1972-1982 by the design of the Russian architect Vladimir Visotin amid other buildings that were involved in the "Ashgabat Reconstruction Program of 1970-1980." The building was done in the Soviet Modernism style and adorned by the Turkmen sculptor Klych Yarmamedov who revered the building with a glorious abstract figure placed in one of the building's corners. Then we will drive to the train station to go to the Kerki town. Night is on the train.

Day 4: Kerki - Koytendag
Being in Kerki you will drive to the Koytendag mountain. The country's most picturesque mountains are Kugitangtau, also called Koytendag, are situated in the very east of Turkmenistan. Their name is translated from Turkmen as "mountains of deep canyons". The edge is cut by many deep canyons with steep cliffs, which make the sky occasionally seen only in a form of narrow strip over the head. There are the deepest lakes, the longest caves and even the Dinosaur Plateau deportment traces of these primeval reptiles. It is this mountain system where the highest point of Turkmenistan - Mount Ayrybaba (3,139 m) is located. In addition, Koytendag Mountains are home to the country's deepest lake - Kattakol. We will stay in the Koytendag and enjoy the open air view. Night is in a tent.

Day 5: Koytendag - Turkmenabat - Ashgabat
In the morning is transfer to the Turkmenabad airport for flight to Ashgabat. Night is in a hotel.

Day 6: Flight
In the morning is transfer to the airport.