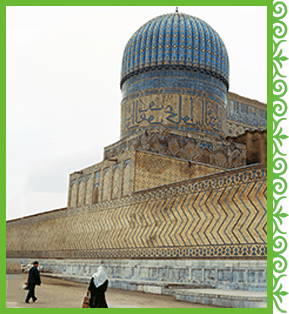 Day 1: Tashkent
We are glad to see you in Uzbekistan. On arrival, you will be met and drive to the city. We will have a city tour. Visit Independence square which is the foremost square of the country, placed as a symbol of victory over fascism in World War II. We will walk along the local Broadway as well as see Tashkent metro. The tour will be continued to Chorsu Bazaar, Kukaldash Madrasah and Hast Imam complex that contains of several madrasahs, mosques and mausoleum. We will admire uniqueness of the Othman Quran which is the world's oldest Quran copy dating back to 8th century. Quran belonged to Othman Ibn Affan, the Third Caliph. Othman was murdered by non-muslims in 8th century. Night is in a hotel.

Day 2: Tashkent - Samarkand (350 km, 4 hrs drive)
In the morning we will travel to Samarkand. Samarkand is positioned in the valley of the river Zerafshan. It is the second largest city of Uzbekistan. You will have a city tour and visit Registan square, Shakhi Zindeh, Mausoleum Guri Emir and Bibi Khanum Mosque. Registan Square, a complex of three captivating Madrasahs of 15-17th centuries. Shakhi Zindeh signifies a large collection of mausoleums of the 11th-15 centuries being a part of a UNESCO World Heritage Site. Bibi Khanum Mosque was built for favorite Tamerlane's wife, after his fruitful campaign in India. Overnight is in a hotel.

Day 3: Samarkand - Urgut - Samarkand
We will drive to a small village outside of Samarkand named Urgut. This village is eminent for its deafening and colorful national bazaar. In the afternoon we will return to Samarkand and driver further to another village where you can see memorial complex of Al Bukhary. Al Bukhary was an Islamic academic, who authored the hadith collection known as Sahih al Bukhari, stared by Sunni Muslims as one of the most authentic Hadith collections. He is an author other books such as Al Adab al Mufrad. Night is in a hotel.

Day 4: Samarkand - Tashkent (350 km)
In the morning is transfer to Tashkent. We will visit Courage Monument which is a commemorative complex, founded in honor of the abolition of the significances of the Tashkent earthquake. Then the tour continues to Zangi Ota memorial complex. According to legend, Zangi Oota was a shepherd and eminent for his wisdom. The city tour will be accomplished by visiting the State Museum of Applied Arts of Uzbekistan, containing of great examples of glasses and national clothing, hand and machine embroidery, skullcaps and national fabrics, carpets and woodcarving. Transfer to a hotel for rest.

Service does not include:
- Visa
- Full board
- Travel insurance
- English speaking guide
- Entrances to all museums
- Train tickets - 60 $ pp for round trip